I love knitting lace. Lace just seems like magic to me.

One knits what looks like a blob, trusting the pattern, trusting that the blob will eventually be something other than blob-like.

This picture is of my blob after the last row was knit, just before doing the bind off.

One then wets the blob down and stretches it out, and all of a sudden it’s no longer blob-like. And – here’s the real magic – it stays in that lovely shape after it dries.

This is my blob, no longer blob-like, blocking away on my bed.

I soaked it for only about 5 minutes – silk absorbs quickly. Then I smooshed it in a towel to get most of the water out. I block using floss through the eyelets and double-pronged blocking pins. I didn’t stretch this shawl as much as I might have stretched wool. Silk has less give and I wasn’t sure about the non-silk content.

(Note to those amongst you who notice such things – you know who you are – after taking this picture I saw that the end point was crooked and the left side wasn’t quite lined up. That was fixed before blocking recommenced, but I didn’t take another picture.) 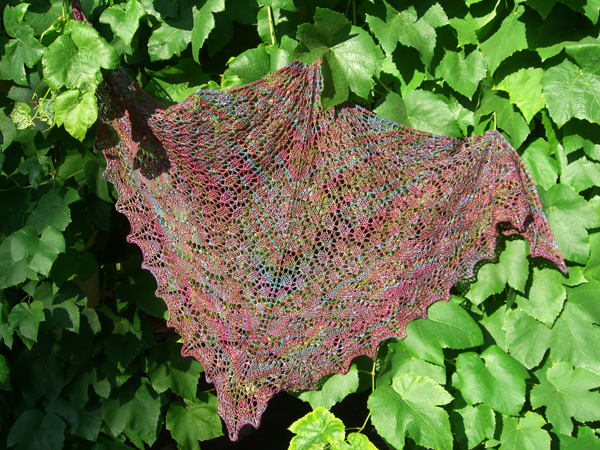 And here we have the finished product, displayed against my grape arbor. Its insubstantiality is shown by the fact that it is being held up by grape leaves twisted together.

On a trip to Victoria, I had purchased a skein of Handmaiden Seasilk in a lovely, one-of-a-kind colorway. I had only 400m of yarn – enough to do only a small project. Interweave Knits serendipitously published the Swallowtail Shawl pattern at about the same time.

I was afraid that the colors would get lost in the lace, but that didn’t happen. Instead the negative space around the solid portions served to enhance the color changes. 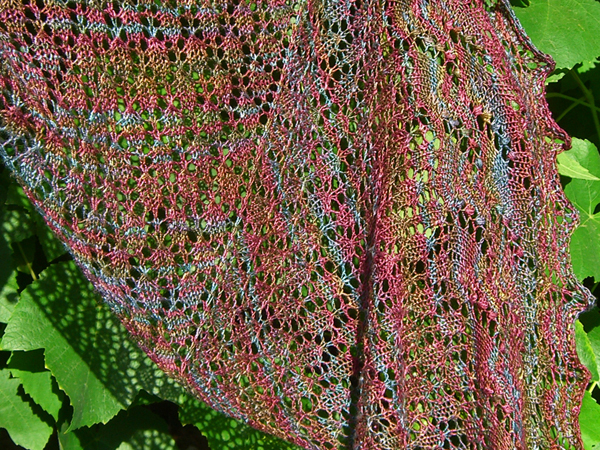 The yarn was a joy to knit.

In fact, I knit obsessively on this project until it was finished, which took about 1 week. The whole time I was knitting it, I showed it to everyone who would stand still long enough to look (even non-knitters, bless them) and insisted that they feel the fiber and exclaim about the colors.

I would have continued to knit obsessively on it had I not come to both the end of the pattern and almost the end of the yarn. I have only a small handful of yarn left.

More Seasilk has found its way into my stash. I’m waiting for the perfect pattern.

I love the pattern that the lace shadow makes against the leaves in the second picture. 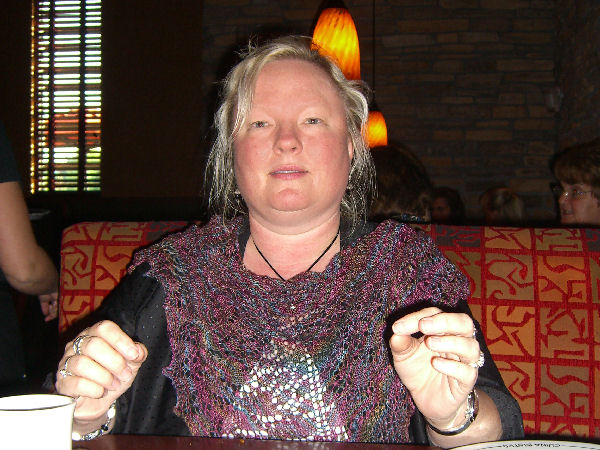 Swallowtail was made as a birthday present for the lovely LT. She was happier than she looks in this picture. Really.