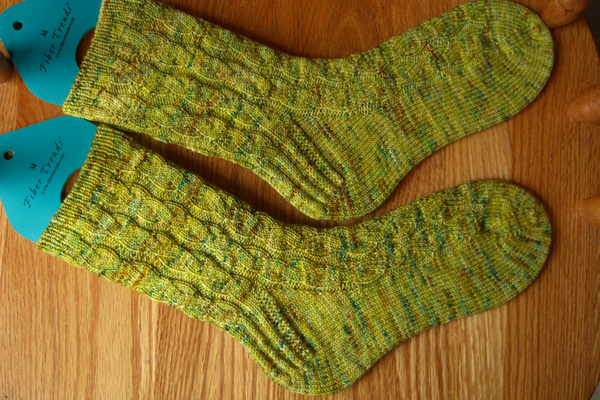 I’m really pleased with the way that these turned out!

These are based on Sock Bug’s free River Rapids Socks pattern. Except, as is my wont, I changed it. I am knitting toe-up instead of cuff-down. And I decided I didn’t want them to be lacy, so I am using M1 increases instead of YO’s.

The color reminds me of Big Springs. There’s a large pond there, with water shaded by the trees and dappled green and brown. Take a look at the water in this picture and you’ll see what I mean. There’s a bridge that crosses the pond, and from the bridge you can see the fish in the water — rainbow and cutthroat trout, mostly, speckled and with orange and red flashing. Big Springs is the source of Henry’s Fork (the northern fork of the Snake River).

This pair of socks is hereby dubbed Snake River Socks.

Interestingly enough, I never hit the usual instep black hole where I knit a bazillion rounds for hours and hours, only to gain a whole 1/2″ of knitting. This time I knit a few rounds, and suddenly I have four inches. Maybe it’s because the stitch pattern was so fun to knit and so fun to see what it was going to do next. 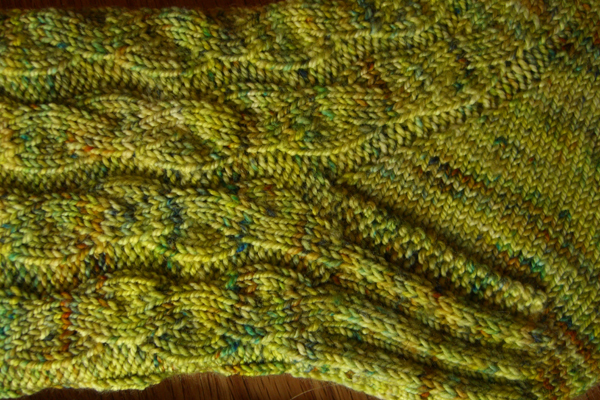 The stitch pattern looks really complicated and cable-ish, when in reality it was simple increases and decreases. Several people have asked me if they are cabled. I love the color, too. And they fit perfectly!

I included the close-up of the heel because I’m quite proud of how it came out. Note how the garter border on the heel flap joins up with the purl stitches in the pattern and the knits stitches sort of flow next to it? Not bad, eh? I was going for sort of a waterfall effect on the heel flap, with the garter stitch representing moss-colored rocks edging the stream. Fitting in with the whole river theme.

I wanted to include a close-up of the ribbing at the top, but neither the camera nor the socks cooperated. Hopefully you can see from the picture how the stitch pattern separates and then rejoins, eventually merging into a 1×1 rib… sort of like a stream rippling over rocks. Or that’s was the plan anyway.

These are going to be on my feet often!