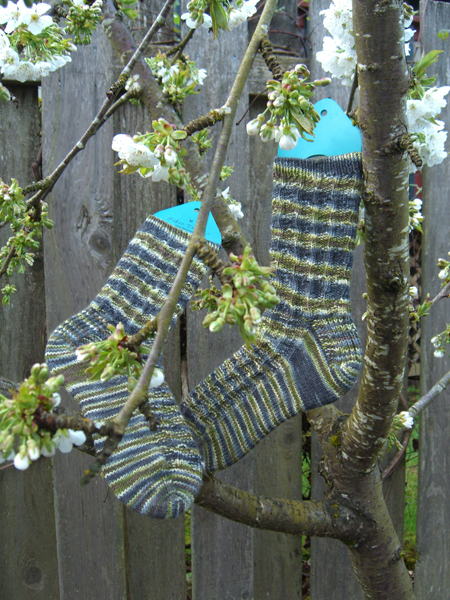 I had knit the stich pattern in correctly on the foot and I debated long and hard back around the heels whether I should frog and start over. In the end, I did not. Usually I’m a stickler for fixing knitting boo-boos. But this time I decided that it just didn’t matter that much. There’s so much going on with the colors that the only part of the stitch pattern that’s really visible is the wavy rib — and that I did OK. The purl stitches get lost in the shuffle.

I actually decided that I like the way it looks because the mistake-stitch seaweed on the foot has a shorter period in its wave because the purl sections are closer together as they move from right to left and back. The shorter wave fits in nicely with the whole foot-vs-leg thing. The stripes are narrower, the waves are shorter. Yeah. That’s my story and I’m sticking to it.

Gentle reader, what are the chance that anyone would buy a story that I meant it to come out that way?

I didn’t think so.

But here is yet another reason to knit both of your socks at the same time, whether you do it from the top or the toe: You make the same mistakes in each. I would have hated to have had to try to recreate my goofs. Of course they are not consistent from one goofy pattern repeat to the next. Each repeat is unique unto itself. Until the ankle, where I actually did it right.

So here they are, posing amongst my cherry trees, in bloom right now. There was just enough good light to get this picture before the Northwest gloom descended. As I type this they are on my feet and they fit perfectly.