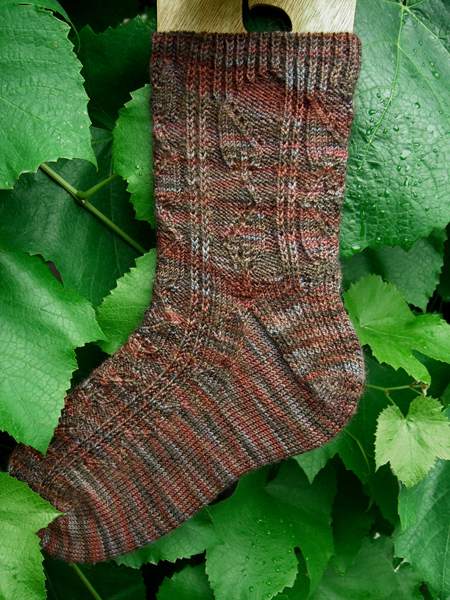 The finished the Java Leaf Socks for my sockapalooza pal! Yea!

I enjoyed knitting these. But I have to admit that I’m glad to have them finished. For some reason it took almost 1/2-way up the legs before I finally got the (fairly simple) lace pattern planted in my alleged brain. So these socks required concentration and that lengthened the time it took to complete them. That’s fine every now and then, but I usually consider socks to be “no attention needed” knitting.

I’m very pleased with the results. Despite the picture here, there really are two socks. Hey… hanging sock blockers up on grape vines is not all that easy!

The color is darker and richer than these pictures show – think good, black coffee. Although it’s a hand-painted yarn, it doesn’t compete with the lace pattern at all. In fact, when I saw the stitch pattern in an old, old book belonging to a friend, I thought of this yarn right away.

I tend to sort of make things up as I go along, and these socks were no different. I did swatch before starting to make sure I understood how the lace was made. But once into the sock I realized that the pattern would not go 4 times around the leg (my original plan) at the gauge I was knitting. Plan B, therefore, was to knit a simplified, slightly narrower leaf pattern on the sides of the sock, and the full-width pattern on the front and back. 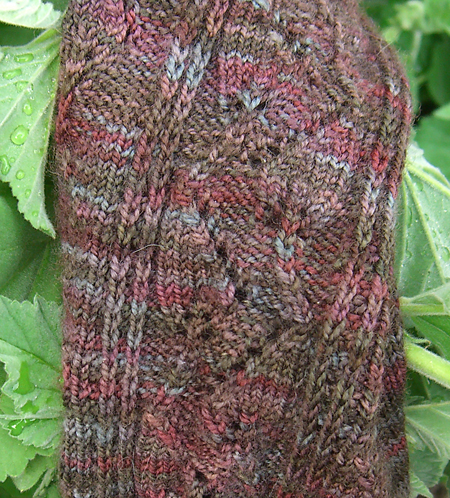 This picture is a close-up of the front and back stitch pattern. You can see that there are two vines of leaves, and each side always slants the same direction. The simplified pattern on the sides has one vine, and the leaf slants alternate.

The four sections are separated by two brioche stitches. I used brioche instead of ribbing at the top of the sock to match the stitches on the side. I really like the way this came out — very stretchy and squooshy, but with the hold of ribbing — and I will probably use this technique on other socks.

The heel flap is in standard slipped heel stitch to match the look of the brioche.

You can see in the picture below that I started the vines all the way at the tip of the toe. Only the vines travel upwards until nearly the end of the toe increases, and then the lace starts. I thought that lace on the toes might be uncomfortable. Vines also zigzag up the sides to join with the simplified leaf pattern above the heel flap on the ankle.

I have to admit that these socks were a stretch for me, in color and in pattern and because I rarely knit lace socks. But they were an enjoyable knit.

Alas they will be one-of-a-kind, because I didn’t take any notes while knitting them. 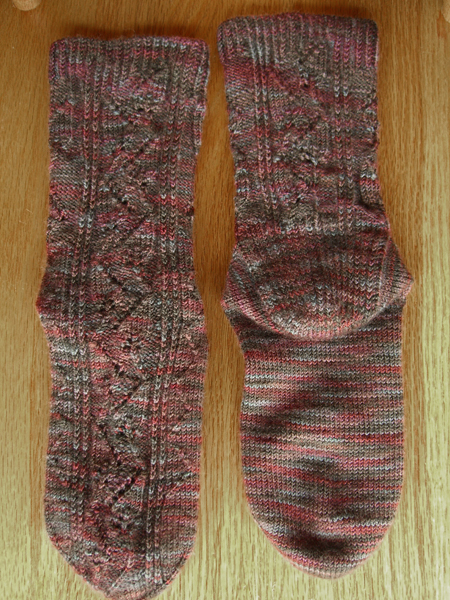 They will be winging their way to my Sockapalooza pal on August 2nd, along with a few other little goodies that my pal might find enjoyable.